I'm at RecSys 2014, meeting a lot of people and hanging out at talks. Some of the discussions here was about the filter bubble which prompted me to formalize my own thoughts.

I firmly believe that it's the role of a system to respect the user's intent. Any sensible system will optimize for user's long-term happiness by providing info back to the user that s/he finds useful. This holds true as long as a system isn't (a) stupid and recommends the wrong content (b) trying to push its own agenda, that may or may not be hidden.

When I go to Google and search for “banana” it tries to predict my intent. I expect to results about bananas back. It's like I go to an Indian restaurant and order something – I expect to get Indian food back.

Now, the chef could be bad, and I might not get what most people consider Indian food. But that's just a “bug”. The chef knows that he should respect my intent.

The other option is that I get some weird food because the chef has a hidden agenda. For instance, maybe s/he puts crack in my food so that I come back tomorrow. Or maybe, s/he gives me a hamburger, tells me this is Indian food, and blatantly lies that there's no other Indian restaurants in United States.

Luckily, we live in a free market, and as long as there's some competition, I believe that the truth will prevail. I'll eventually figure out that there are other Indian restaurants and I will discover that they are much better. This also means that there's really no incentive for the chef to serve something that's wildly different that what I'm asking for.

My point is, I think any system's role is to respect the intent of the user, and serve whatever you ask for. It's the user's role to decide what s/he wants to consume, and in a free market I think there will be those options out there.

Anyway, this story took a funny twist. As I was debating this over Twitter, some Twitter bot stepped in and started offering advice on Indian restaurants. Obviously unfiltered and neutral. 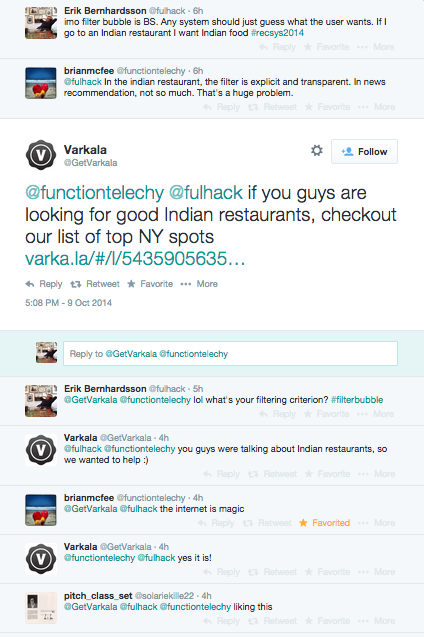