Apparently MTA (the company running the NYC subway) has a real-time API. My fascination for the subway takes autistic proportions and so obviously I had to analyze some of the data. The documentation is somewhat terrible, but here's some relevant code for how to use the API:

I started tracking all subway trains one day and completely forgot about it. Several weeks later I had a 3GB large data dump full of all the arrivals for 1, 2, 3, 4, 5, 6, L, SI and GC (the latter two being Staten Island railway and Grand Central Shuttle).

Let's do some cool stuff with this data!

For instance, here are a bunch of subway trains for a while on the 1 line:

The reason I started looking at this data was to understand if to what extent waiting for a subway is “sunk cost” vs. an investment. In particular, what is the optimal strategy if you're waiting for the subway? My intuition told me that there's a T such that the expected additional time you have to wait goes down as you approach T, but then goes up afterwards. Until T, every second you wait gets you closer to the next subway. After T, there's most likely some random issue with the subway and you should just give up.

Turns out there is such a thing. But let's start by just looking at a plot of subway delays. The distribution of time between two trains $$ P(t) $$ looks like this: 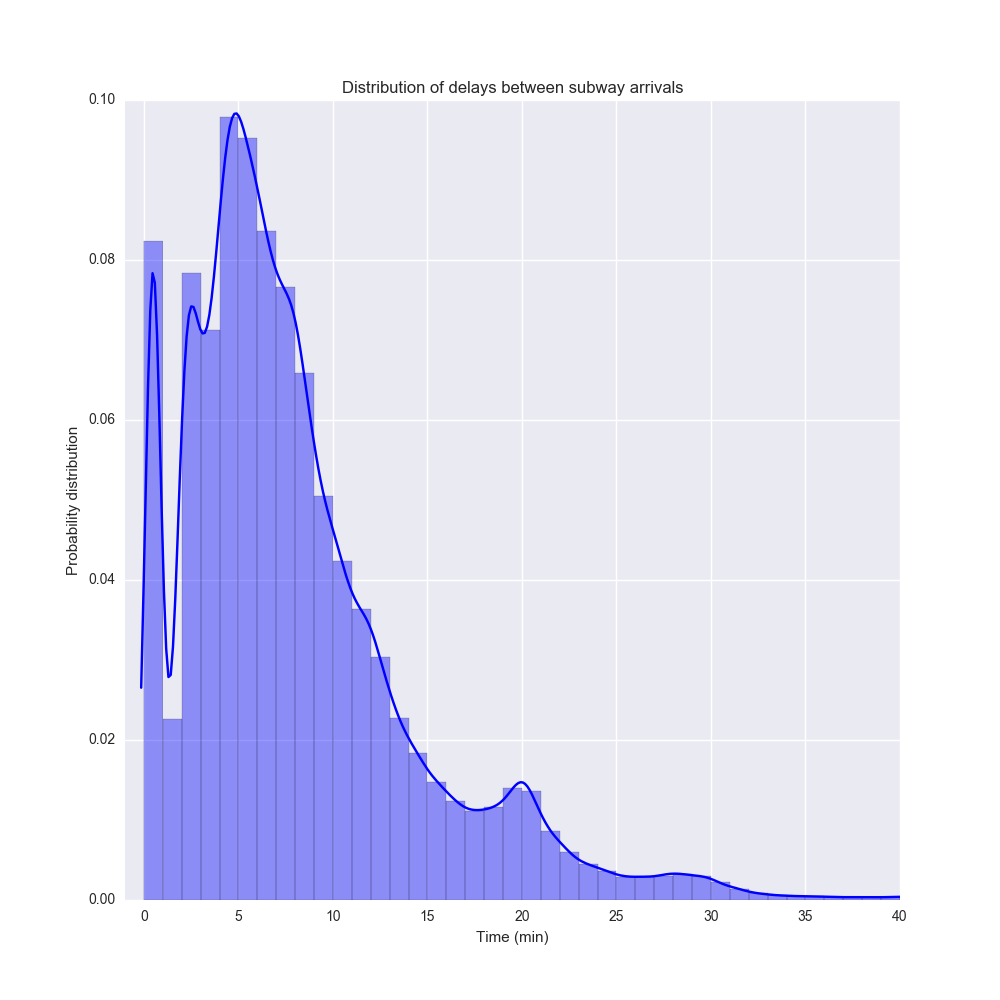 An interesting thing is that the distribution is multimodal with the biggest peak around 5 minutes and another around 20 minutes. I suspect this reflect rush hour vs night traffic. There's also a peak just after 0 which I suspect is just what happens during rush our traffic when subways end up clustering. 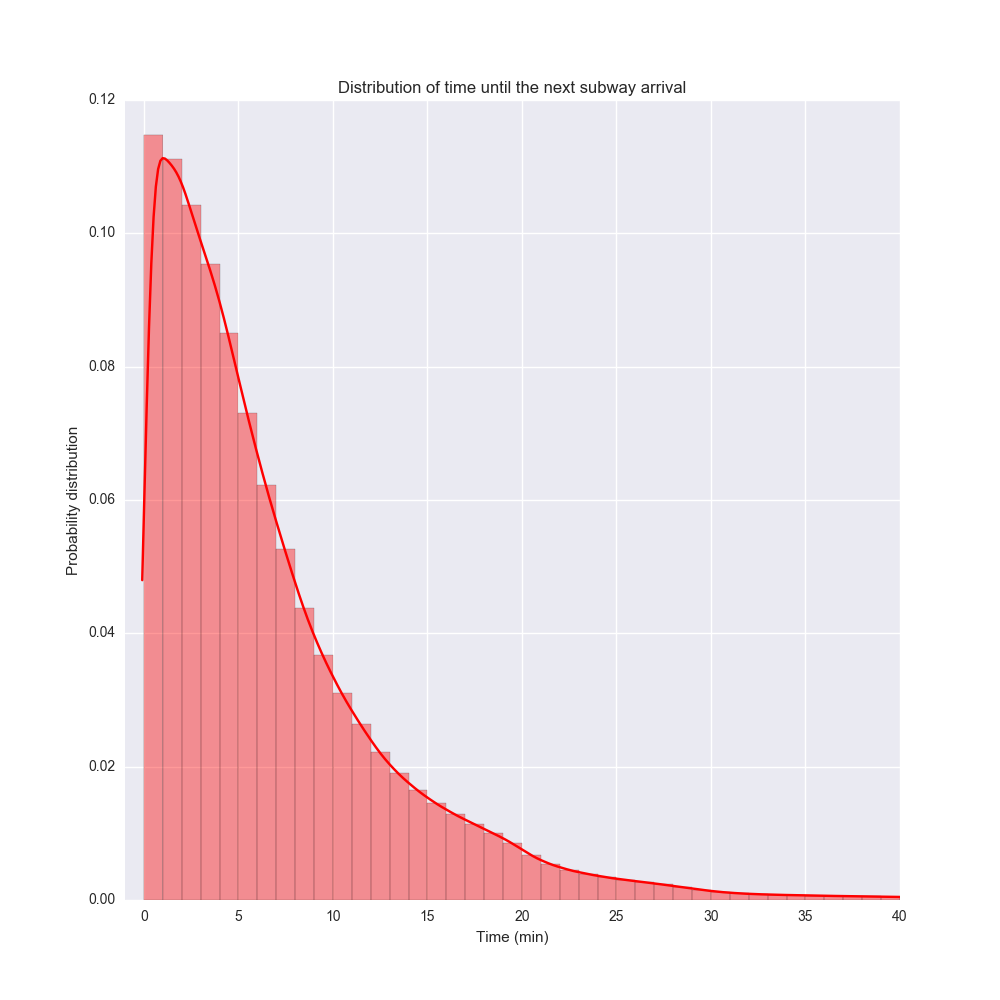 This distribution is a bit more regular. The most likely time you have to wait (the mode) is actually about 1 minute, although the mean and the median are much larger.

Let's plot the average time to arrival by line. This is limited to the lines in the API. Let's switch to a violin plot using Seaborn. 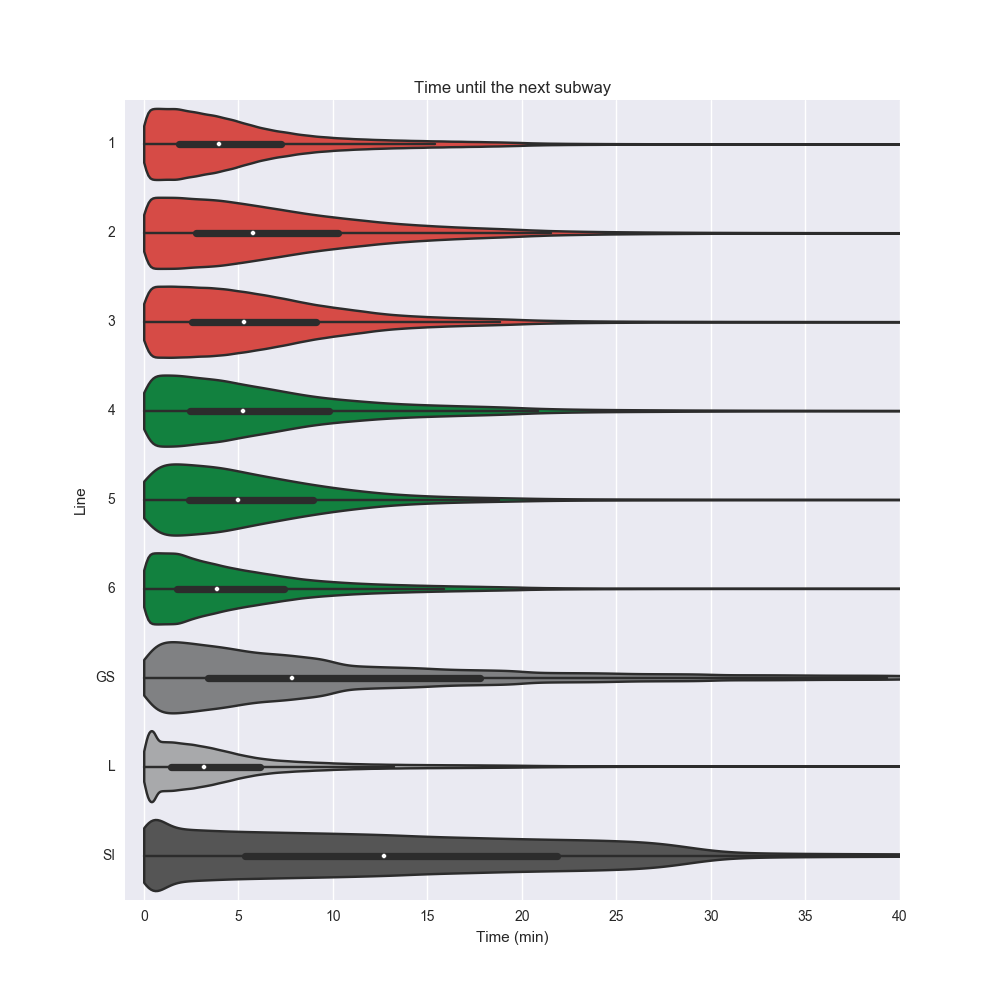 Interestingly, L stacks up pretty well against the other subway lines, despite its notorious delays (and websites such as is the L train fucked). The median waiting time is the smallest out of all the lines, and even the extreme case compares favorably.

(Btw the key data set of chart is MTA's offical color schema. Did you know that the color of L is not a perfect gray but actually #A7A9AC – marginally more blue? Amazing)

Waiting time by time of day

Obviously time of day is an extremely important factor here so let's look at the waiting time by time of day. Each point in time gives us a probility distribution over waiting time so let's plot some of the quartiles and how it changes over the day! 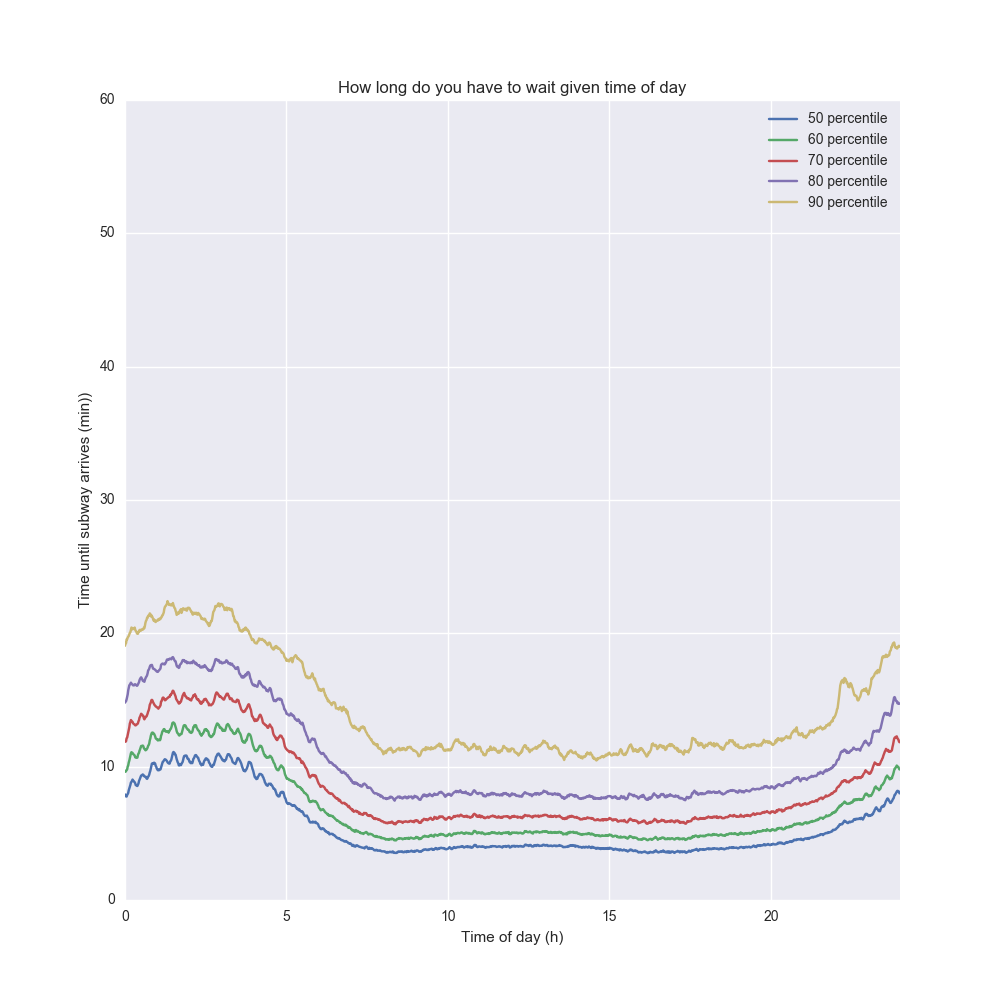 Not shockingly, the waiting times peak in the wee hours – in particular the 90th percentile shoots up around 4AM. The 7AM-7PM window is very stable, and then it shoots up again.

Waiting for subway and sunk cost

It also depends on your risk averseness again – if you need to make it to a flight, you might just give up and get a cab at some point. So given that you spent $$ t $$ minutes so far waiting for the subway, what's the additional time you're going to have to wait? 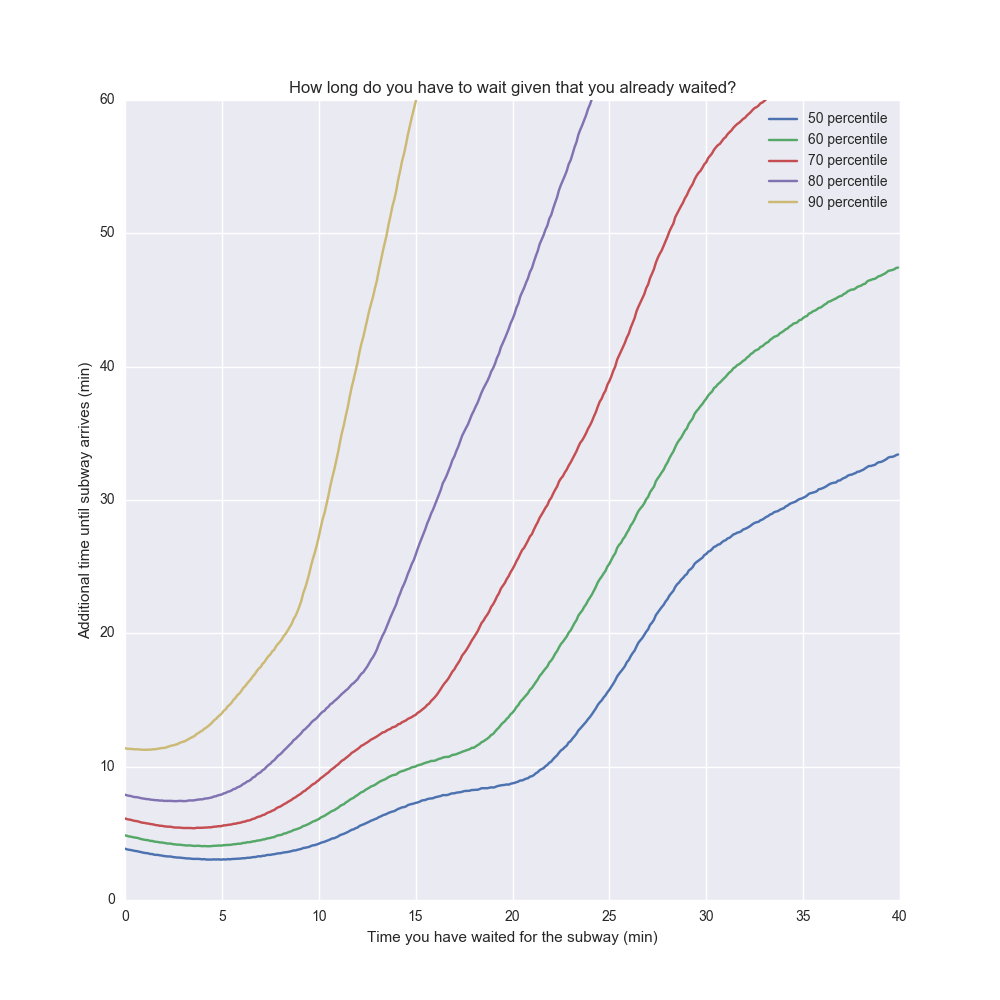 There's a tricky bias here, because the times where you waited longer tends to skew towards nights. This would be a confounding factor. So I limited the data set to 7AM-7PM above.

So when should you give up waiting? One way to think about it is how much time you think it's worth waiting. The time you already waited is “sunk cost” so it doesn't really matter. What matters is how much additional time you are willing to wait. Let's assume you want to optimize for a wait time that's less than 30 min in 90% of the cases. Then the max time you should wait is about 11 minutes until giving up (this is at the point where the yellow line cuts the 30 min mark).

This reminds me a bit of project management. The longer a project has been going on, the longer the expected value of additional time is. Whatever resources you spent is sunk cost but what matters is the most likely estimation of project completion going forward. But of course the more overdue a project is, the longer that estimate is.

All code is available here if you are curious!