Missing the point about microservices: it's about testing and deploying independently

Ok, so I have to first preface this whole blog post by a few things:

What's up with iteration speed!

I'm sort of obsessed about iteration speed. I've written about this in the past and it deserves more posts in the future, but the quick summary is that iteration speed is always going to be the strongest competitive advantage in this industry. You can't really patent anything and proprietary technology is often much less valuable than companies would like to admit. So what do you do? You start shipping new feature quicker, you learn faster from users, and you run faster than your competitors (a.k.a. the “gingerbread man strategy”).

Let's talk about testing and deploying

There's of course many ways we can iterate faster, but for today let's focus on two particular aspects of it: testing and deploying more often. I'm a big proponent of continuous deployment. I'm also a huge proponent of fast test suites. Why? You have been reading this far without any graphics so you deserve one. Tracing back all the dependencies and how it fits together, it looks like something like this in my head: 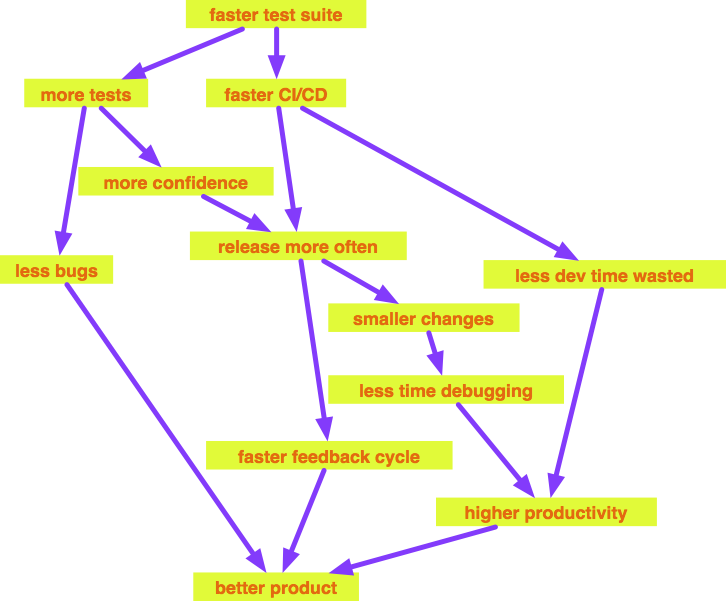 So it seems like we could improve a lot of things if we could test and deploy things faster! Of course, there's a long series of steps to get there:

By now it should be clear why splitting things up makes sense. But just as xy=0 when y=0 regardless of how large x is, don't expect that you can just breaking your sweet old monolith up into two services and derive tremendous value from that. It's rarely very valuable unless you can test and deploy those parts independently:

Here's where I see so many blog posts where people are missing the point:

Why are you doing wrong things? Because you're putting in tons of work separating out things into independent units, without reaping the benefits of fast testing and deploying cycles.

Of course, things get harder

I'm not going to dwell on this and there's much that has been written, including Steve Yegge's epic rant. Testing things in isolation means each part needs to make assumptions about how the other parts will behave and mock them out properly. Deploying a new version of an API call can be annoying and has to be done in multiple smaller steps. Tracing requests can be a massive pain. I could go on all day.

But as Americans are fond of saying, there are no free lunches.

Some questionable reasons to consider microservices

I mentioned 98% of the value is being able to test and deploy things independently? I think the other benefits are fairly marginal at best:

I'm obsessed with iteration speed and could write about 17 more blog posts about it. If there are any takeaways I want to leave you with, it's these