Feel free to bring this up in five years to make me embarrassed about how wrong I turned out to be. But let me walk you through my thinking—I think some of it is quite well illustrated through the story of Redshift.

Snowflake2 is a $100B+ publicly traded company. Basically their entire offering is a data warehouse that looks fairly similar to Redshift.3

If you looked at Redshift in 2012, there was a lot of things that favored it. AWS had large economies of scale, had control of the underlying substrate (EC2), and could make larger investments in building the software. Maybe because of the value of lock-in, they could even subsidize the development of Redshift and make up the money through other products. Anyway, this is what it looks like nine years later4:

What happened? But my more general question is: what are the forces that favor a company like Snowflake?5 And what does that mean for other cloud products?

There's some sort of folk wisdom that the lowest layer of cloud services is a pure commodity service. So in order to make money you need to do at least one of:

I think there's some truth to these, at least looking historically, but there are some interesting trends blowing in the other way: 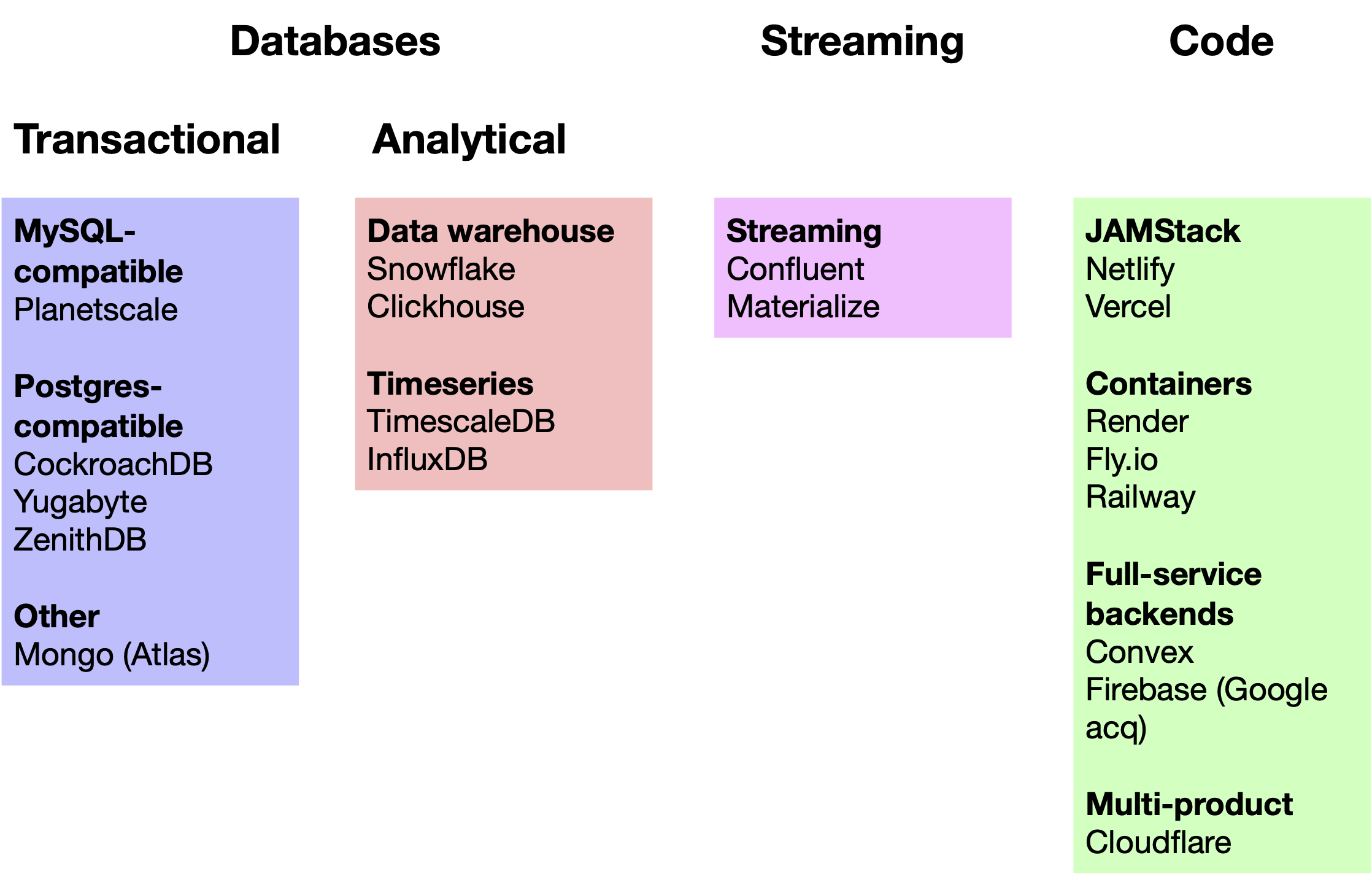 What's going on? Probably a confluence of a lot of things. If I was tired, I would just shrug and say something like “startup circle of life, whatever”. And I think this is roughly one factor, but I see at least 3 different ones:

Let's say a customer is spending $1M/year on Redshift. That nets AWS about6 $500-700k in gross profits, after paying for EC2 operational cost and depreciation. If that customer switches their $1M/year budget to Snowflake, then about $400k7 goes back to AWS, making AWS about $200k in gross profits.

That seems kind of bad for AWS? I don't know, we ignored a bunch of stuff here. Snowflake's projected8 2022 research and development costs are 20% of revenue, and their sales and marketing costs are 48%! For a million bucks revenue, that's $700k. Translated back to AWS, maybe AWS would have spent $300-400k for the same thing? Seems reasonable.

Now the math suddenly adds up to me. AWS basically ends up with the same bottom line impact, but effectively “outsources” to Snowflake all the cost of building software and selling it. That seems like a good deal for them!

I'm not so sure? I spent six years as a CTO and moving from one cloud to another isn't something I even remotely considered. My company, like most, spent far more money on engineer salaries than the cloud itself. Putting precious eng time on a cloud migration isn't worth it unless cloud spend starts to become a significant fraction of your gross margins. Which is true for some companies! But those are in a minority.

A significant factor in all of this is that existing infra provides significant “gravity”. It's not like you can just pick whichever cloud vendor has the cheapest database and run your DB there. You want to run things in the same cloud provider9 and in the same data center10. Looking at sign-up flows for cloud products gives us a hint:

The screenshots above show the onboarding for Snowflake, Confluent, and MongoDB (Atlas). They all ask:

Note that the only options for the first questions are AWS, GCP, and Azure.

The other side of the equation of a potential cloud migration is—how much money you can save? And I think the truth it's never going to be substantial, since no one wants to start a price war. Being in a fairly stable oligopoly seems pretty nice and cozy, and if I was cloud vendor, I wouldn't try rock the boat.

The forces I've talked about have been most clear when you look at Snowflake vs Redshift, but you can see it in other places too. Transactional databases is another very exciting area. But where I think we'll see the most change is how software vendors will increasingly run customer code.

One way to tell the story in 2030 looking backwards is that the cloud vendors needed software running on top of it, so they had to provide that themselves first, in order to drive cloud adoption. Luckily they already had a bunch of internal stuff they could ship! But eventually the market matured, and they could focus on the place in the stack where they had the strongest advantage.

This generated a bunch of comments on Hacker News, most of which strongly disagree! Looking forward to see what the world looks like in 10 years.

Thanks to Josh Wills, Akshat Bubna, and Sarah Catanzaro for feedback on an earlier version of this post!