For most people straight out of school, work life is a bit of a culture shock. For me it was an awesome experience, but a lot of the constraints were different and I had to learn to optimize for different things. It wasn't necessarily the technology that I struggled with. The hardest part was how to manage my own projects and my time, as well as how to grow and make impact as an engineer. I've listed some of my biggest mistakes, which are also mistakes I see other (mostly junior) engineers make.

Having the wrong scope

How do you know what's the right amount of work to spend on a project? I had horrible intuition about this coming out of school. One thing I think is helpful is to think of the relationship between time spent and impact. For a given project, it looks something like this: 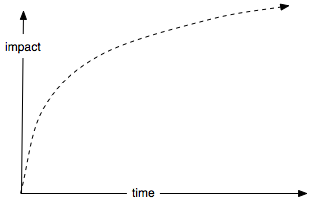 It usually ends up being a concave function.

The problem is in real life you actually need to pick not just one point on one curve but a points on each many curves. Actually an infinite number of curves. And you need to pick these points subject to the constraint that you get the maximum value per time invested. 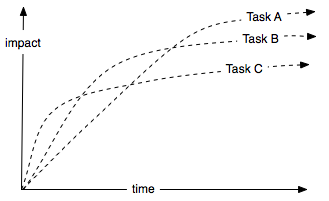 This is a much harder problem! It means the amount of time we spend on task A is actually determined not just by how hard task A is but how hard an infinite number of other tasks are.

Let's get mathematical here: for this concave optimization problem you can show that the marginal impact of each task should be identical. (I really want to write a book some day called The Mathematics of Project Management)

This means: recognize when the marginal impact of spending more time on a project starts to get low and you get more marginal impact elsewhere. Or just think: is this already good enough to deliver user value? Then take a break and look at the whole portfolio of possible task: ignoring what I have done so far, what's the highest impact next thing I can do?

Focusing only on the things you are supposed to focus on

This might sound weird. What are you supposed to do at work? Most of the time you should probably do what your team/manager told you to do. But guess what? Your team/manager is not an all-seeing all-knowing oracle. Sometimes you might actually have a better idea of what to do.

Your sole purpose of working somewhere is to deliver value for the company. Completing a task from the backlog is a great proxy for that. But it's still a proxy and as such has no intrinsic value. In many cases there might be even higher leverage things that no one will tell you to do. For instance, look around you. Is the team struggling with some old framework? Can you help someone get unblocked?

I like people to come in every morning and ask themselves: what is the highest impact thing I can do to for the company today? And do that. If you think about it, task backlogs is a completely artificial construct needed because we don't have perfect information.

This gets especially important if you are interested in management roles. The higher up you get, the less people are going to tell you what to do. 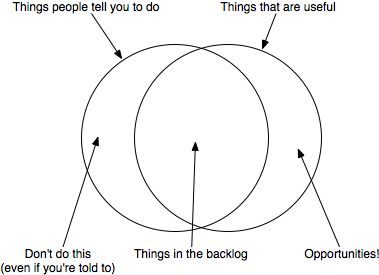 Focusing only on low-leverage activities

There's only that much leverage you get by being an individual contributor. Even if you're a 10x engineer. Look around you for things with a force multiplier built in. Usually that means applying something to the entire team. Are you using the wrong language for the tool? Spend a few days investigating something else, introduce it to the team, and watch the whole team move twice as fast.

I used to work with Neville Li at Spotify who was a genius at finding these opportunities. He also never did what you told him to. Instead, he would spend days reading blogs and trying new technologies. Every few months he would find something that made the whole team 2x as much productive. Then he would organize a workshop, introduce it to the team, and move on.

This is probably my most cynical note, or optimistic, depending on how you look at it.

Being a software engineer is a fantastic career in many ways. With lots of freedom comes a lot of responsibilities. If you want to stay fresh, you need to invest a fair amount of your spare time.

Not drawing diagrams on glass walls

This is a no-brainer. Everyone knows that solid software engineers work draw everything on glass walls. And they also write everything flipped horizontally because it's cooler. 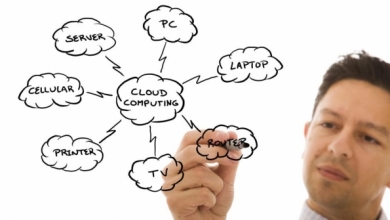