(This is not a very relevant/useful post for regular readers – feel free to skip. I thought I would share it so people can find it on Google.)

My blog blew up twice in a week earlier this year when I landed on Hacker News. The first time I was asleep so I didn't notice that the site went down. The second time I did notice, and scrambled to reconfigure Apache & MySQL to handle the load.

I decided it was time to move off Wordpress.

This is something I had been thinking for a long time – I hated the layout with my old site, especially the typography. I probably could have spent a bunch of time tweaking it but it also feels philosophically wrong to run a LAMP stack in 2016 for something as simple as a blog.

After some research I chose Jekyll. I liked the idea of static content and it seemed very lightweight. To do this I had to

Additionally I reconfigured some stuff around related pages (brew install gsl, gem install rb-gsl, set lsi: true in _config.yml). LSI is a pretty crappy algorithm for NLP but unfortunately there's nothing better out there.

Since the entire state is stored in the file system, I also use Github to host a repo with the blog in it. I'm still hosting the blog on a Digitalocean droplet, but might kill it and just switch to Github Pages at some point.

Page load time went down drastically after deploying it: 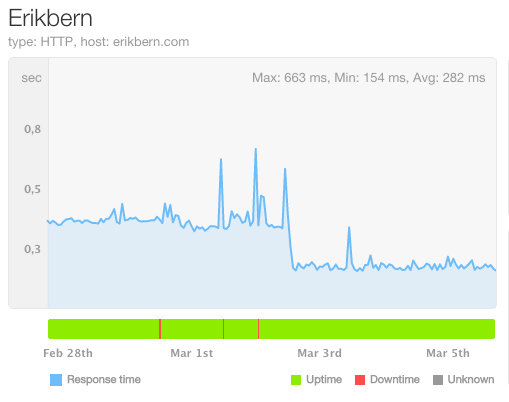 This was all good until and I was running happily on my new blog until I was checking Feedly. First it claimed that I was no longer subscribed to my own blog, then when I added it, my number of subscribers had dropped from 300 to 9. WTF! I realized it's because my previous RSS was broken. I ended up setting up some 301 redirects using Apache. First of all, in /feed/.htaccess

This will redirect /feed/ to atom.xml. Then I moved index.php to wordpress.php and set this up in /.htaccess:

I'm now up to 230 readers on Feedly – not sure wtf is going on but seems better than 9. Please resubscribe if you lost it!