This blog post Data sets are the new server rooms makes the point that a bunch of companies raise a ton of money to go get really proprietary awesome data as a competitive moat. Because once you have the data, you can build a better product, and no one can copy it (at least not very cheaply). Ideally you hit a virtuous cycle as well, where usage of your system once it takes of gives even more data, which makes the system even better, which attracts more users…

The behavior of machine learning models with increasing amounts of data is interesting. If you're building a machine learning based company, first of all you want to make sure that more data gives you better algorithms.

But that's a necessary, not sufficient condition. You also need to find a sweet spot where

In the recommender system world (where I spent 5 years) it's not uncommon for algorithms to basically converge after say 100M or 1B data points. It depends on how many items you have, of course. Some class of models converge before they are even useful, in which case obviously there's no value in more data. Xavier Amatriain has an excellent Quora answer that I urge you to check out if you want to learn more.

Anyway let's simplify the problem. Let's consider the behavior of some algos: 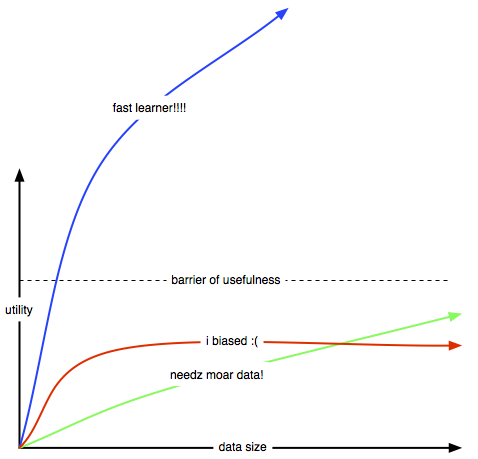 Here are some sweet spots where I think you can build up a data set, but it's hard. Hard is good because it means once you did it, you have a moat:

Hard to remember? Here's a handy table I made 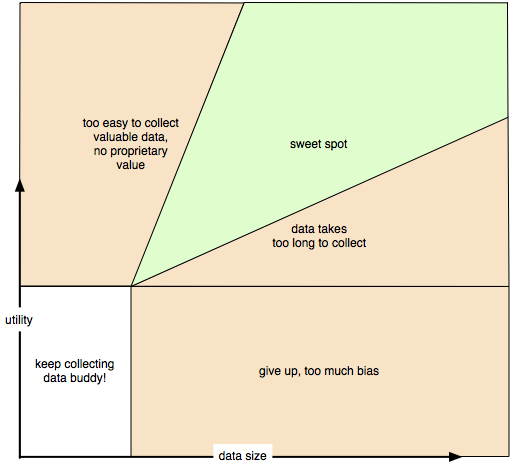 I think the general idea is pretty valid. But is it 100% correct? Probably not. Is it oversimplified? Oh yeah, to the extreme.