Lessons from content marketing myself (aka blogging) for five years

I started writing this blog in late 2012, partly because I felt like it would help me improve my English and my writing skills, partly because I kept having a lot of random ideas in my head and I wanted to write them down somewhere. I honestly never cared too much about finding a particular niche, I just wanted to write down stuff that I found interesting. I set up a Wordpress blog on my crappy Swedish virtual private server.

2012 and 2013 were pretty slow, but a few of my blog posts would occasionally get picked up by some obscure online forum and get a few hundred hits in a day. A few hundred hits in a day! Back in the day when I saw a sudden spike of say 200 users in a day, that was a massive deal. I kept writing stuff for more than two years without really getting many readers. Looking back I'm sometimes asking myself why? But I kind of just wrote random things and was happy about it.

In late 2014, I wrote a blog post about my experiment training a neural network to play chess. It hit Hacker News front page and generated something like 50k page views in a few days. Since then, I've had several blog posts that “went viral” and generated a bunch of traffic.

It's not a ton of volume compared to New York Times, but for me it's a lot. My top post (the eigenvector post) is at 128k page views so far.

History of my blog, as told by Google Analytics

This is monthly page views since 2013. I'm now averaging about 20,000 pageviews per month so about 600/day although it's extremely spiky. If I switch to daily granularity it looks kind of silly:

The average (as I mentioned) is about 600 but the maximum is more than 50k. This is clearly not a Poisson but some really fat tailed distribution!

I get about 50 page views per day from Google search results. Not sure if this number should be higher.

I also have 1k+ subscribers on Feedly. I don't know the exact number, since it just shows up as “1K” once I crossed the 1,000 limit. I think you can tell from the User-Agent strings of the access logs but it's not showing up for some reason.

History of my blog, as told by Pingdom

Looking at uptime and page view latency is a bit like understanding volcano eruptions by digging out ice from Greenland:

Almost all the red lines are caused by blog posts going viral. It's honestly something I'm pretty embarrassed by! In total the uptime is 99.85% which I guess isn't terrible, but weighted by traffic volume it's probably far less.

But here's the good news. The uptime since April 2017 is ONE HUNDRED PERCENT 💯 . 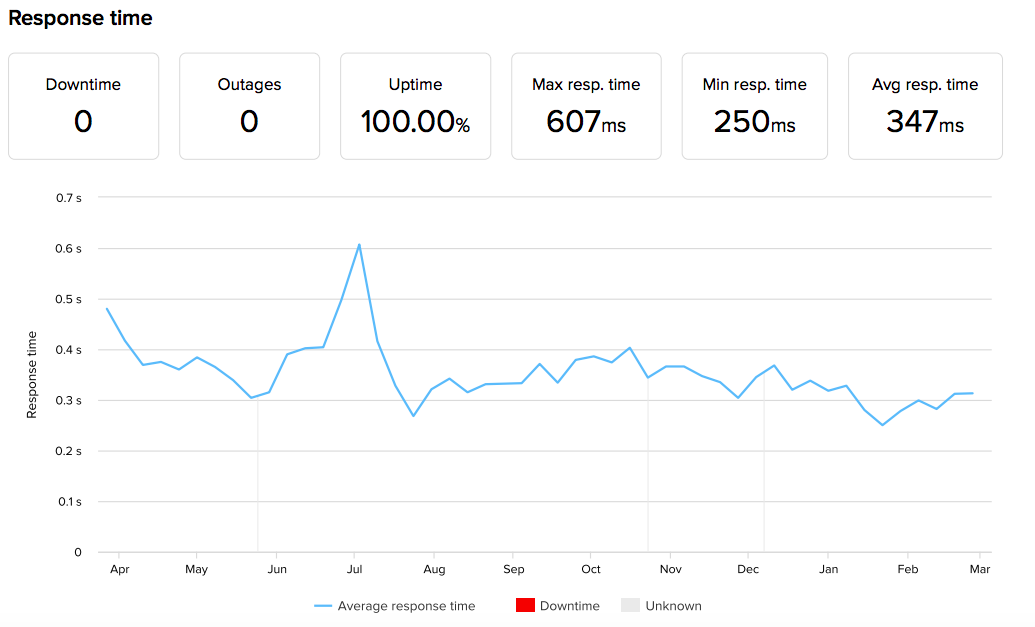 I've had a lot of downtime in the past, cause by traffic spikes. The worst one was when my font post landed on Hacker News in the middle of the night. I woke up and my blog had been down all night. It did generate a lot of traffic from other sites, but sadly very little from Hacker News.

Honestly I think the hardest problem about provisioning my blog for traffic spikes is fighting my Swedish modesty that always tells me no one is going to read my blog posts anyway. But some stuff on the technical side I've learned:

In retrospect, I should have just used a static site generator and S3+Cloudfront from scratch. Don't run your own server, it's just a recipe for failure. Cloudfront is also nice because it lets you set up HTTPS termination very easily, but if you don't care about HTTPS, you can also just use S3 and run it on HTTP. I've also heard good things about Cloudflare. My AWS bill for Cloudfront and S3 is about ~$5-10/month these days, so not a lot of money.

At some point I also became obsessed with page speed. The choice of the very minimalistic theme made it easy, so after some minor tweaks (like inlining all CSS), I'm now proud to announce that I have a 99/100 score on Pagespeed Insights ⚡.

Some stuff I've learned about writing